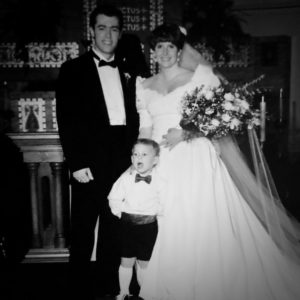 years ago this month, I stood at the front of St. Joseph’s Church next to my best friend as we waited for his bride to walk up the aisle. She was preceded by her ring bearer, a little boy named Stuart.

Mary and Stuart met while she was an oncology nurse at Methodist Hospital and he was undergoing cancer treatments. They formed a strong bond, growing close as only caregiver and patient can. For his part, Stuart was a tough little guy who maintained a cheerful disposition and a positive attitude throughout. And Mary, well… I’ve told you about her before.

Stuart is about 30 now, married, perhaps with kids of his own. I’ve thought of him often over the years and I’m struck by how thin the margin is between success and failure. In his individual case, the treatments worked and he’s gone on to live a fruitful life. But there are so many others with tragically different outcomes. I imagine how many kids we’ve lost, how much of a difference they could have made in the world, how they may have gone on to truly change the fabric of our lives. What measure of blessings could have been realized had they lived?

I have no doubt that we’ll eventually find a cure for cancer, but I’m troubled by the word ‘eventually.’ Why not now? Why not today?

Why not help by donating… today?