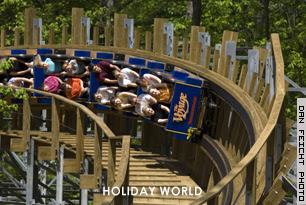 Voyage, Holiday World’s mammoth wooden roller coaster, has just earned praise from Amusement Today magazine as “Best Wooden Coaster on The Planet.” After so much exposure to all the bunk about other claims (“Best [fill in any seemingly unimpressive item here] in The World!!”), it’s truly refreshing when something gets recognized for actually having achieved the designation.

Of course, we could debate on the authority of the organization bestowing such award, but for this category, for this particular award, I’ll give them the benefit of the doubt.

Holiday World won four Golden Ticket Awards, which are considered the Academy Awards for the amusement park industry. Aside from Voyage, Holiday World was recognized as the Friendliest Park, Cleanest Park, and for having the Best New Water Slide.