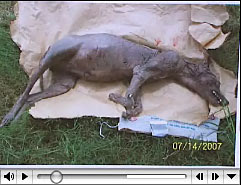 Someone call Fox and Mulder. Phylis Canion, a rancher in South Texas, has a body in her freezer, and it’s the body of a bloodsucker. “[It] opened [the cage] reached in pulled the chicken head out, sucked all the blood out, left the chicken in the cage,” she said.

She thinks the body she has is an example of the elusive, possibly mythical, chupacabra (which means, literally, “goat sucker” in Spanish.) These animals have been spotted several times over the years, and even more often in recent days around this small Texas town. Some experts think this particular animal is a mangy grey fox. For her part, Canion isn’t convinced. She’s sent the specimen off to the University of Texas where DNA tests are currently underway.

[See the story from KENS-TV]
[Read about the Chupacabra on Wikipedia]
[Read about another, similar find from Elmendorf, Texas]